Managers Muddy The Waters….Without Meaning To!

I have been wrestling with this topic in my mind and out loud with others for a bit. I want to share formed and in the process of being developed concepts to see what you consider relevant.

We’ll be exploring delineating a manager’s responsibility between workforce performance corrections and aspirational coaching interactions, which may challenge your convictions.

But please don’t stop reading as a minor adjustment in approach on your part could be the difference-maker for your employee’s development.

First, let’s take a look at your people. Because I hate to tell you companies have a historical fail rate at preparing employees for the future. At one point, human resource experts estimated that 69 percent of employees were not being trained for the future.

One-on-one development meetings are the most powerful ability a manager can strap onto their management tool belt. Unfortunately, many muddy the coaching waters handicapping their employee’s hoped-for turn-around. 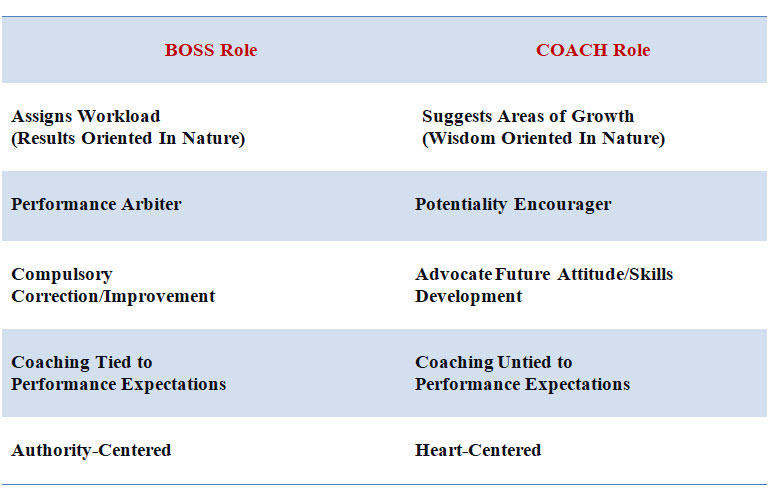 Creating a distinction between corrective and potential discussions is crucial.

What do I mean by this?

There has to be a separation between performance and coaching exchanges in your mind and your employees as well. Often this line is blurred, which is where muddying the water comes into play.

Part of the problem is the term coaching when employed by a boss, as it means:

Do you see the problem? No part of the definition says coaches are responsible for performance evaluations or salary increases or career future, does it? The recognition of a manager’s carrot or stick power is where the waters become muddy.

No question, it’s tricky for both you and your employee.

Yes. As a boss, your employee encounters can be sociable, yet you have to realize much of your conversations center on the area of your positional authority and responsibility. The tension coming from your employee’s perspective is your official role colors the advice you’re handing out. Is what you’ve said for the greater good of the company, or you, or is it for the employee?

If you’re interested in unclouding the waters, here are a few tips to help you along the way.

New World—New Ways: Research is indicating that companies [and its managers] who adopt a philosophy of “constructive capitalism” [values that are meaningful to humans] or of a more “conscious” way of working routinely perform better from a financial perspective, as well.[i]

The old way of managing that taps into a more one-way paternalistic relationship approach is no longer the winning formula. It is neither effective nor appreciated by today’s employees. Employees are more savvy and jaded than in years past. Once you adapt to a new style of relating to staff, you gain a competitive edge that you’ll like.

Pearls Of Wisdom Conversations: Remarkable managers understand corrective–even ones performed in a coach’s voice—aren’t enough to engage an employee’s heart and mind. They realize coaching centered on opening an employee’s mind to see possibilities they’ve never seen before for themselves. Or perhaps help your employee consider a new skill not essential for today’s job, but prepares them for tomorrow. Or it could be you assisting your employee in achieving their aspirations with less effort and more joy.

It isn’t so much a boss-subordinate interaction. It is someone wiser who is more familiar with the business culture, reaching out with a helping hand for their employee to touch their big future—more significant than the one they have today.

Aspirational coaching isn’t about your employee’s performance. Instead, it’s about unlocking prospects for them. The fact is that this style of coaching isn’t about hitting a target. They could fail miserably or never make any progress, and they’re still a great employee. The only harm they sustain is to themselves as they limit their future.

Space Distinction: Consider holding future/possibility coaching sessions in a more neutral, casual setting than your office. Walking outside or sitting at a picnic table or sharing a meal in the cafeteria sends the message that you’ve removed your positional mantle to become the wise sage who cares not merely for the company or your own career, but that of your employee’s potentiality. If you’re unable to find a space outside of your office, do not take a seat behind your desk. Instead, pull up a chair and sit side-by-side. This action signals a shift from a boss into a trusted advisor role.

And don’t jump from authority into coaching in the same breath. A distinct construct between the two interchanges is essential, so your employee has clarity from the get-go regarding where the advice is coming, whether as manager or coach.

Humans Are Good At Compartmentalizing: It’s our nature to organize and equip our life for operational ease. It’s how we deal with life. It’s how we handle our world. When you move from boss to coach, the question mark from your subordinate’s side of the table is whose interest you’re bettering.

The intent of introducing this topic is to create a new level of awareness. As a manager, you are viewed through the lens of authority by your employees. You can’t get around it.

Okay, you apply coaching tactics while correcting behavior or outcomes, but it still is received as a mandate by your employee. Today’s employees want more from their bosses. They want assistance in career expansion attached to their greater good—not the company’s bottom-line or your career growth.

Studies show how critical generating the contrast has you being a power-hitter manager able to balance your two separate roles strategically. A boss who gives an employee a sense they are cared for has a more significant impact on their trust and safety feelings. Employees, who say they have a supportive manager, are 1.3 times as likely to stay with the organization and are 67 percent more engaged.[ii]

What do you think?